What is currently acceptable in the field of translating the ancient texts is a travesty. The Rigveda is known to be difficult text to translate and there are many hideous translations of it, and really, there is no translation of the Bible, Quran, Upanishads, Bhagavad-Gita, Yoga Sutras, and so on, any better. The translations of the core texts of all the major religions on the earth are nonsense, make-believe, and tailored to fit a particular agenda. It is no wonder that the world is in such a state of confusion, with followers of one religion fighting followers of another system, a sad situation indeed.

Any verse from any ancient text can illustrate the point, so here is a mantra containing the name of the Divine Mother, the Goddess of the Earth. Here is a transliteration of the Lakshmi Mantra to Roman letters.

The common English translation of the verse is, “Oh Mother! You who are established as the energy of prosperity everywhere, I bow down to you again and again.”

The only words used in the translation appear in bold type and are yā, sarva, lakṣmī, and nam (who, everywhere, prosperity, and bow down). Only a small portion of the text was translated and a verse representing the Sacred Word of God was fabricated. When I began studying the Sacred Texts of the world, I assumed there was validity to the translations. Adherents take them that way, but they are anything but. If you want to find out for yourself, all you have to do is start translating.

You can start with this verse. I have not translated it, but if I were, I would discover the meaning of the various Sanskrit words and syllables of the text and go from there. Here is a start.

The Sanskrit syllable yā can mean, who, whom, to advance, travel, go away, retire, arrive at, reach, and so on.

The Sanskrit word devī refers to the Goddess, Queen, or Supernatural Power (the Kuṇḍalinī).

The Sanskrit word sarva refers to everyone, all, manifold, various, different, altogether, everywhere, and completely.

Part of the next word is bhūta and it means to become, or has been, or actually happened, true, real, existing, a great devotee, or any living being.

Lakṣmī is the Goddess, Mother Earth, and in Sanskrit, the word means good fortune, prosperity, happiness, beauty, and charm.

The word rupeṇa does not appear in the dictionary, but the syllable rup means to suffer violent pain, or confound, disturb, break off, or refers to the earth.

I do not find sansthitā in the dictionary.

The syllable san means to win, gain, acquire, obtain as a gift, enjoy, give, to be successful or fulfilled, or to gain for another.

The other part of the word is sthita, and it means to be standing firm, abiding in, engaged in, intent upon, devoted to, determined, faithful to a promise, and so on.

Namas is as close as I can come to the next word, and it means to bow, obedience, a reverential salutation, adoration, thunderbolt, and to gift.

The syllable nam means to bow, to submit oneself, to turn away, keep aside, turn towards, aim at, to give away, keep silent, or keep quiet.

The syllable tas means to fade away, perish, cast upward or downward, carry, propel, or throw.

The syllable asta means to be thrown, to cast, to be left off, given up, or is a missile or an arrow.

At first look, that is what I find. It is not the whole verse, so further work is necessary. Nevertheless, I think that if you study the words and syllables of the verse and compare them to the English translation, you will realize that the translation is far from conveying the truth of God.

Obviously, this sample verse is obscure to many, but none of the world’s holiest books have been translated any better. Sad but true, and the make-believe stories derived from have become the foundation of many religions. Oh! No!

In comparison, the foundation of the Philosophical System of AH is solid, because when the ancient foundational texts to all the religions are fully translated, such is the teaching.

The Nectar of AH and heaven, and to and from with AH is a sort of mantra to obtain. 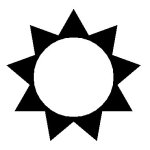