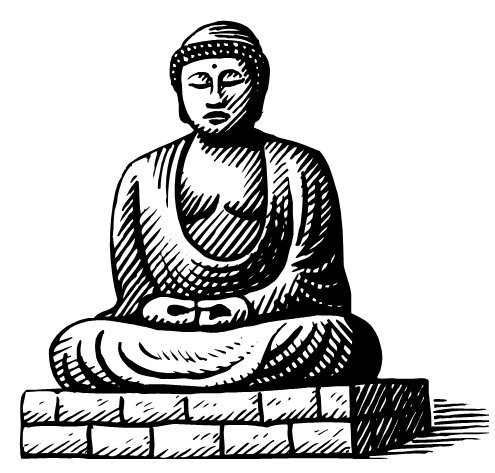 The philosophy to follow to attain the heavenly state has many names, such as the way, the Middle Way, the path, the good path to good fortune, the knowledge of happiness, the Philosophical System of AH, the Universal Rule, and so on.

Shakyamuni Buddha, Angirasa Kumara, was the last Buddha to roam the earth. Kumara means a prince, a child, or an heir apparent in Sanskrit, and the prince was an Angira, a person of the lineage of Rishis, seers possessing extraordinary perceptions. They are most notably associated with the Rigveda, the oldest religious text in existence. The lineage ended before the text appeared in Sanskrit around 1,000 BC, and nowadays, the Buddha is mistakenly thought to have taught the Four Noble Truths. The philosophy delivered by the Buddha was the Nyaya System, the Universal Rule. Nya in Sanskrit means to give up or resign and aya means a favorable fortune.

A philosophy is a theory of the principles or laws regulating the universe and knowledge. A system of forming an arrangement of things into a whole and for that, a course of conduct is given. The Sacred Text is a call to become a saint, a wonderworker, a tireless promoter of unity among all people, and to go towards to help the disadvantaged and the disturbed of the world is the religious calling. There are many titles for the spiritually enlightened, but only one way to attain a title, and that, master the philosophy and abandon the ego. The text says it takes virtue and going beyond, and herein is the same teaching all enlightened beings adhered to for that. Here is a mantra from the Veda, from the Nyaya, the Universal Rule.

Yes, stand fast with a measure of AH, to become bright long for stillness and to come is a name of Buddha and the knowledge of heaven.