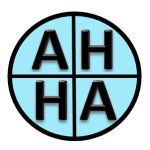 Like many other languages around the world, the Sanskrit alphabet begins with the letter A. The sound is like the ‘a’ in father or the ‘u’ in up, and it is an expression of surprise, delight, satisfaction, pain, and so on. The sound of ‘a’ is a natural expression of the body, but because it is holy, I write it as AH.

AH is the first sound in the universe and everything is derived and sustained by it. The Supreme Sacred Sound of the Creator is unbroken, eternal, and comes with the breath to all living beings in the fourth note of the musical scale, the key of F. People normally do not hear that sound, but a hissing sound, but if you inhale the breath quickly and forcefully through the nose, you might. If you stop and think about it, you might realize that you have heard and made the sound of AH a million times and the experience will likely be the same for every person around the world. All God’s Creatures make the sound. The inarticulate syllable of AH often accompanies the first breath of life, often quite forcefully. In the very act of creating life, a loving couple might utter the syllable repeatedly. Take a drink of water on a warm day, miss a nail and hit your finger with a hammer, find a solution to a problem, and the sound of AH just might happen by itself. AH is a universal phenomenon.

Here is a verse from the Veda about the Sacred Syllable of AH.

The nectar of AH is extracted for pure happiness, from the air to obtain to serve with compassion.