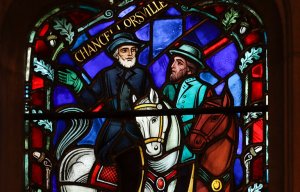 Robert E Lee and Stonewall Jackson led the war against the United States.

A couple of weeks ago, it was decided that two stained glass windows at the National Cathedral in Washington, DC would be removed. These windows honor the Confederate war Generals Robert E. Lee and Thomas “Stonewall” Jackson. The announcement stated, “After considerable prayer and deliberation, the Cathedral Chapter voted Tuesday to immediately remove the windows. The Chapter believes that these windows are not only inconsistent with our current mission to serve as a house of prayer for all people, but also a barrier to our important work on racial justice and racial reconciliation. Their association with racial oppression, human subjugation and white supremacy does not belong in the sacred fabric of this Cathedral.”

That is certainly a noble move on the part of the church, but the windows never should have been installed in the first place. The Holy Teaching of Heaven is against war and the killing of others, so if the church is interested in promoting the Holy Way, the stained glass windows should display images of people helping others. Most of the 10 Commandments of Christianity are nonsense with the exception of the seventh that states, “Do not kill.” The meaning of that is not clear in the Christian Doctrine, but it means do not kill any human, animal, bird, fish, or any creature sharing the same living breath we all share. If you have any interest in enjoying the fruits of heaven, you need to follow the Heavenly Way.

Here is a verse from the Veda for a life of happiness.

The Leader to delight in is all around,

And to separate from people to arouse,

But to be among for love for those,

A must to be with One.