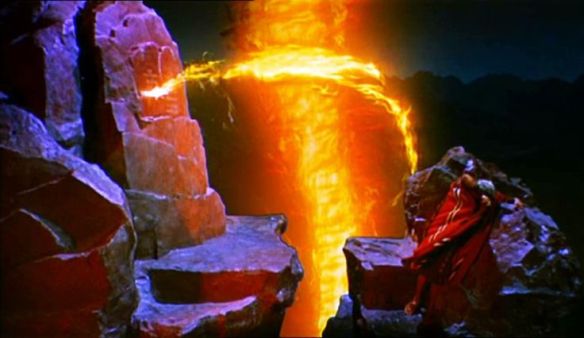 A still from the movie “The Ten Commandments” by Cecil B. DeMill. An imaginary depiction of God carving the Commandments in stone.

The Ten Commandments are associated with Christianity and Judaism and are said to have been inscribed by God on two stone tablets that were given to Moses while he was upon Mount Sinai. The picture above is a depiction of the incident in Cecil B. DeMill’s 1956 movie by the same name. It was a very dramatic scene to watch with the fire and smoke, but as you might imagine, it is imaginary. The Commandments are listed twice in the Bible due to their importance in the religions, so it is quite unfortunate that the translation of those Hebrew verses is so far from the truth.

The Ten Commandments that appear in the Bible are not the words of God, but the words of men. However, in distant times, such as the last Golden Age, a set of rules was known on the earth, and it was given by God. The Golden Age started around 16,000 BC and ended about 7,000 BC, and since then, the Knowledge of Heaven has disappeared and the rules and regulations of men appeared.

What is known as the Golden Rule appears in religions and cultures across the world, and because of that, it is likely from the Golden Age. Here we are 10,000 years later and we still know about treating others as we wish to be treated.

The Ten Commandments of Christianity and Sharia Law of Islam are deemed the word of God, but are simply the words of men. If you are confused, you cannot go wrong by following the Golden Rule. If you follow that, you will not kill or harm any living creature of the land, air, and sea. Nonviolence is paramount if you have an interest in tasting the delights of heaven. Those walking the Holy Path are peaceful and dedicate their lives to helping others. Such is a necessity on the path to heaven, along with mastering the meditations to become enlightened for helping all upon the earth.

Here is a verse from the Veda.

To exert oneself for a mover to be absorbed into on the one side to bring into a state on the other to smile, a virtue attaining for the suffering, and of the five, the number “one” is to be able and to serve a sort of mantra to urge.