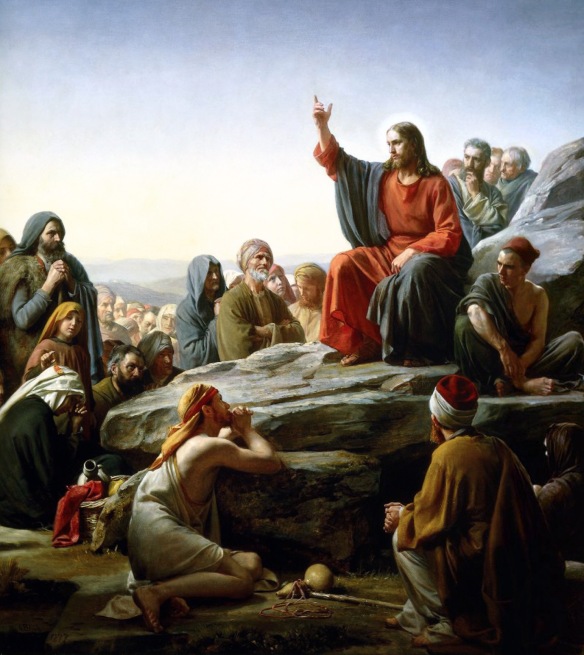 “The Sermon on the Mount”
A painting by Carl Heinrich Bloch, 1890

Here are a few incidents that cause a person to question the Christian Religion. There is a clerk in the United States that refuses to serve certain people because of her strong religious convictions. There is a country called Hungary that not only refuses to help people fleeing the horrors of war in Syria and elsewhere, but also stands in the way of those wanting to help. The other day the Hungarian military fired water cannons and chemical weapons upon refugees hoping to find a passage through the country. The refugees are seeking refuge, safety, in any country that will accept them, but Hungary closed its border, leaving thousands stranded. The President of Hungary does not want to help because those wishing a passage through the country are not Christians. There is also a country called Slovakia that says it will accept 200 refugees from the Middle East, but will only except Christians, because it is a Christian country. Other countries in the area are also closing their borders and erecting razor wire fences to keep the refugees out. It is dreadful situation.

The message that comes through is discrimination, bigotry, and that is not the Holy Teaching of the Father in Heaven or the Goddess of the Earth. The Holy Teaching is to treat others fairly, to be caring. If the interest is experiencing the Heavenly State, the requirement is to tread the Holy Path. We are one family upon the earth, and the Heavenly Message is to be helpful and compassionate, yes, like a mother to a child. The Golden Rule is an Ancient Tradition and the foundational teaching of many religions around the world. It appears in the translations of the Bible, such as in Luke 6:31, “One should treat others as one would like others to treat oneself.”

Here is a verse from the Veda for the Whole Family on Earth.

Heaven calls on from the state above for the endeavor to obtain,

A place frequented by all is away from,

To go towards the despondent with a smile,

As the Protector and approaching with prayers.